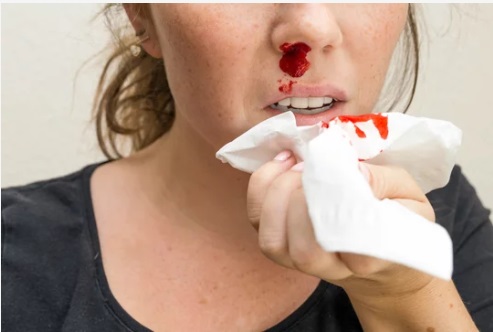 Your nose! It probably isn’t something you think about all that much, at least until it starts gushing blood everywhere.  Nosebleeds can show up out of nowhere and some people get more of them than others.

Sometimes when a character on TV gets a nosebleed, it’s like a sign that something is seriously wrong with them, but in real life, there is usually nothing to worry about.  How often they happen mostly depends upon how dry your nose is or on how often you stick your finger up there.

Up to 60% of people will get a nosebleed at least once in their lives, which shocks me because who are these people who don’t get nosebleeds and how can I be one of them.  That’s probably because those people get sick more easily, which can irritate their noses.

The official term for nosebleed is EPISTAXIS and there are 2 types of them.

The most common type is Anterior Epistaxis where blood vessels from a group just inside your nostrils rupture and it usually involves one nostril.  The group of blood vessels is called Kiesselbach’s plexus or Little’s area after the doctors who first described it and those nosebleeds can usually be treated at home.

A nosebleed can also start in the back of the nose.  Those are called Posterior Nosebleeds and they usually involve both nostrils.  They can be more serious and sometimes require a doctor, and they often happen in the elderly because of other health problems, like high blood pressure.  They start when arteries rupture from a group called Woodruff’s plexus, and since they are closer to the back of your throat, the blood can sometimes drain down there and cause nausea and vomiting.

Most nosebleeds happen spontaneously.  They usually happen when things like dry air, smoke, or dehydration dry out some of the mucus that protects your nasal septum that barrier that splits your nose into two nostrils.  That leaves your nose’s sensitive membranes more exposed, so blood vessels rupture more easily.

Applying pressure to your nose will slow the bleeding, so cells like platelets can create blood clots to seal the hole.

In serious cases, a doctor might actually have to close the wound with chemicals like silver nitrate or electric cautery, but it will normally stop on its own.  So, if you do get a nosebleed, especially the kind where you bleed from the front of your nose, it’s most likely from dry weather, allergies, or because somebody punched you in the face or you scratched your nose with your fingernail.  Just try to keep your nose clean and hydrated so your natural mucus can do its thing.

Nosebleeds are common, especially if you have colds or allergies. Many things can cause a nosebleed.  Some nosebleeds stop on their own with pressure.  Others need packing. Some get cauterized (sealed).  If you have gauze or other packing materials in your nose, you will need to follow up with your doctor to have the packing removed.  You may need more treatment if you get nosebleeds a lot.

How can you care for yourself at home?

How to prevent nosebleeds?

When should you call for help?

Watch closely for changes in your health, and be sure to contact your doctor if:

Remember to never lie down or tilt the head back during a nosebleed, as this could choke you or cause coffee-colored vomiting later.

Take care of yourself and live healthy.