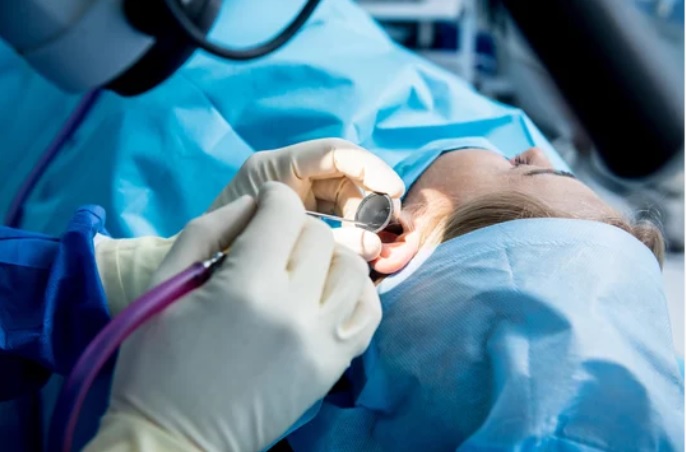 Eardrums might perforate during an accident, injury, and most commonly due to a middle ear infection. In the longer run, they might disrupt our hearing abilities. Thus, is it crucial to go for treatment at the earliest?

But, if our hole happens to be bigger, then that is when the ENT doctor shall call for a surgery called — Tympanoplasty.

SYMPTOMS THAT SHOW THE NEED FOR TYMPANOPLASTY:-

Tympanoplasty is the surgery of the eardrum. This procedure is carried forward by the doctor in a systematic order.

Firstly, the surgeon will make sure that the ear is dry before surgery, as there is no pus or discharge in the ear.

It is recommended that the ear should be dry for 3 to 4 weeks before proceeding with tympanoplasty.

The surgeon might do a paper-patch test before the surgery.

WHAT IS A PAPER-PATCH TEST?

If there is no improvement, it indicates ossicular problems such as fixation or discontinuity.

Later, when the patient is prepared for the surgery, the actual surgical procedure is done.

For this, a local anesthetic agent like Lignocaine is administered in and around the ear. Once the area becomes numb. Then, either a small incision is made at the back of our ear (Post aural approach), or the doctor might choose to directly operate through the ear canal (Transcanal approach).

Be it a machine or an incision, the ultimate aim is to reach out to the eardrum.

On reaching the eardrum, the doctor will examine the eardrum to study its state, and then the location of the hole is traced. Further, a layer of tissue known as FASCIA is scraped from the muscle in close approximation to the ear and is placed gently in the middle ear to cover the hole. The most common fascia used is the TEMPORALIS MUSCLE FASCIA.

The layer of the fascia used will form a network of blood flow to the surrounding skin on the eardrum. This method is called grafting, where the Temporalis fascia graft works as a scaffolding for the ear drum perforation’s margins to grow along its surface and will foster the growth and division of ear drum cells, which will eventually seal the hole.

The tympanoplasty surgery will be over in approximately a minimum of 1 hour to a maximum of 3 hours.

Another form of ear surgery is called —

SYMPTOMS THAT SHOW THE NEED FOR SURGERY:-

Mastoidectomy is a surgery done on the mastoid cells located right behind our ear, which is close to the middle ear.

Mastoid cells are porous bone cells that are known to be porous because of the air cavities present in them. These air cavities maintain pressure across the ear and protect the middle ear region.

When your ear is infected, it is expected to start from the outer ear and then move to the middle ear.

Now this infection can be mild, severe, or moderate.

The methods of surgery are:-

When the bacteria that is breeding in our middle ear further spread towards our mastoid cells happen to be extremely virulent and rapidly dividing, then the infection goes out of control which is when the entire middle ear portion along with the infected mastoid cells is surgically removed. This is called Radical mastoidectomy.

If the bacteria infecting your ear is moderately pathogenic, then though we can get rid of the infected mastoid cells by surgery, it is not easy to combat such an infection in the middle ear. Thus, in this case, your doctor might go for an advanced surgical method where they might remove only certain infected parts of the middle ear along with the infected mastoid cells. This is called modified radical mastoidectomy.

After discussing all 3 cases, we can incur that except for the first one, the second and third cases will lead to hearing disabilities as the middle ear region is being partially or completely removed. Thus, it is supposed to be taken care of. It is best recommended to use hearing aids after such surgeries, while some of them incorporate hearing aids during the surgery itself.

Such infections take an overall toll on our bodies. And because the tympanum is a part of our middle ear, an ear hole is also formed. This hole is further treated by tympanoplasty.

It will take nearly 2-3 hours.

Once you are out of the operation theatre, you will be kept under observation for a minimum of one day, and later you shall be discharged depending on your health conditions.

Before leaving your doctor’s guidance, it is important for you to know the following precautions to be taken for another 2 weeks:

Right after 2 weeks of your surgery, you will be called by your doctor for a follow-up where the doctor will look at the progress of the surgery and will eventually remove the stitches, which is the final step.

It would take nearly 2-3 months for anybody to completely recover from the surgery. And in this process, a little bit of puss oozing out and pain in the ear is common, and it will gradually get better. After some days, you can hear well, and you will be back to normal.

In spite of it being 2 months from the surgery, if you can’t see any recovery or if you face any adverse health ailments like vomiting, difficulty in standing, unable to walk or talk, then immediately look out for your doctor as there could be possible side effects which should be treated at the earliest.