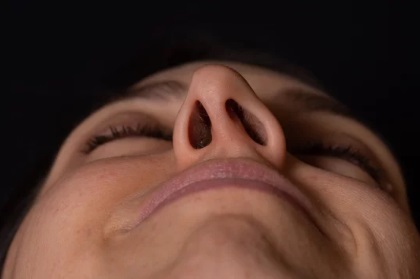 Today, I will discuss Deviated Nasal Septum (DNS), which means bending of the nasal cartilage/bone leading to the deviation and deformity of the nose.

The deviated nasal septum is an important and MOST COMMON cause of nasal obstruction.

There are 3 major functions of our nose, which are —

1) Filtering the air when we breathe,

2) Moistens the dry air and brings the temperature of breathed air to the body temperature, and

3) Trapping the external bacteria and viruses.

Why does Nasal Septum deviate to one side?

1. INJURY TO NOSE DURING BIRTH OF BABY

It generally occurs when a child takes birth. So, while traveling through the birth canal as the passage is too small, it can hurt the baby’s nose, OR

When the child is growing, the skeleton of the face is also growing. However, if a child hurts his nose, due to the injury, the growth pattern gets disrupted and it causes deviation to the septum.

The symptoms of DNS are nasal blockage, frequent headaches, nose bleeding, and snoring.  These are common symptoms in many people, but when the problem increases significantly, it causes problems.

Many people self-medicate themselves using nasal sprays such as Xylometazoline / Oxymetazoline, but this is not a permanent solution.  Nasal decongestants are only temporary measures because a deviated septum CAN NOT be cured by nasal sprays.  It can only be corrected through surgery which is known as SEPTOPLASTY.

Now, there are many surgical methods through which deviated nasal septum can be corrected such as conventional methods and endoscopic methods.

Usually, it is a simple procedure.  You will be discharged after a day with very minimal blood loss, and very minimal discomfort.

If you face the above-mentioned symptoms, consult an ENT surgeon and get it diagnosed. You don’t need to learn to live with it.

DNS may lead to sinusitis, frequent headaches, and breathing problems and if it can be cured with such a simple procedure then there is no harm in getting it done.  If the problem is purely due to the deviated septum then once the septum is corrected, it will not happen again.

The nasal cavity is divided into two by the nasal septum.  Problems arise when it is not dividing it symmetrically, leading to a condition known as the deviated nasal septum.

The deviated nasal septum is the displacement of the nasal septum.  It is an abnormal condition in which the cartilaginous ridge leans to the left or right causing obstruction of the affected nasal passage.

Any abnormal pressure applied to the nasal septum results in its deviation to one side or another.

If there is a lateral blow on the nose, it leads to displacement of septal cartilage from the vomerine groove and the maxillary crest.

If there is a crushing blow from the front, it can lead to buckling, twisting, and fractures of the nasal septum.  Also, there can be telescoping of the fragments, which are fractured.

Birth trauma can also be a cause of deviated nasal septum.

The nasal septum is normally formed by tectoseptal process which descends down to meet the two halves of the developing palate in the midline.  If there is unequal growth between the palate and the base of the skull, it can lead to buckling of the nasal septum.

In mouth breathers (as seen in Adenoid hypertrophy), their palate is high arched, so in this case, also the septum can deviate.  Deviated nasal septum can be associated with cleft lip and palate.

Members of the same family can have DNS.

There is dislocation of the septal cartilage into one of the nasal chambers and this is seen better by looking at the base of the nose when the patient’s head is tilted backward.

The nasal septum is dislocated into one of the nasal chambers.

The septum deviates to one side and the nasal chamber on the concave side of the nasal septum will be wider.

This can occur in the vertical or anteroposterior plane.  In this case, there is bilateral nasal obstruction.

Shelf-like projections, which are commonly found in the junction of the bone and cartilage, are the SPURS.  They may press on the lateral wall of the nose leading to headaches.  Also, they predispose to repeated epistaxis from the stretched vessels.

This can be due to organized hematoma or because of overriding of the dislocated septal fragments.

Clinical features of the deviated nasal septum are —

The nasal obstruction can be unilateral or bilateral based on the type of septal deformity.

So, if it is C-shaped, there will be unilateral obstruction.

If it is S-shaped deformity, there will be bilateral obstruction.

The site of nasal obstruction can be —-

Unilateral choanal atresia may be missed in infancy and childhood and the choanal polyp can also be missed on anterior rhinoscopy as it grows backwards.

Headache is especially seen in a nasal spur type of deviated nasal septum because it presses on the lateral wall of the nose leading to pressure headache.

Sinusitis can occur due to obstruction of the sinus ostia by the deviated septum.

The mucosa over the deviated part of the septum is exposed to the drying effects of air currents due to which there is crust formation because of excessive drying.

So, these crusts when removed can cause bleeding that is epistaxis.

Anosmia is due to the failure of inspired air to reach the olfactory region.

With the deviation of cartilaginous or both the bony and cartilaginous dorsum of nose, there can be deformities of the nasal tip or columella.

The surgery may be done along with other procedures to treat chronic sinusitis, inflammation, or bleeding. It’s also done to correct sleep apnea. And it may be done to allow access into the nose to remove nasal polyps.

Minor cases of deviated nasal septum require no treatment.  If the symptoms are severe, then on reaching the age of 18 years, you can opt for septoplasty, in which the most deviated parts of nasal septum are removed and the rest of septum is corrected and repositioned.

A more radical form of this operation is sub-mucous resection, in which mucoperichondrial and mucoperiosteal flaps overlying one side of the septum are lifted.  Most of the septum is removed and flaps repositioned.

Submucosal resection of nasal septum can be done under done under general or local anesthesia.

To do the surgery, the surgeon cuts the outer membrane that lines your nose.  Then the surgeon elevates the mucoperichondrial and the mucoperiosteal flaps away from the cartilage wall.

Next, the cartilage is reshaped or moved, or both. The mucoperichondrial and the mucoperiosteal flaps are repositioned back.  After the surgery, you may have splints and packing inside your nose.  These help hold the cartilage in place while it heals.

Most people go home 1-2 days after surgery.  You can probably go back to work or school in a few days and your normal routine in about 3 weeks.  It may take 1 to 2 months before you feel completely normal again.

Care for yourself at home: